The Diverse Minds of Autism (Part 1 of 4)

There is no way to cover this topic fully. There are different theories and information. There are many of us who know parts and pieces, often not connected to one another. For those of us in this state of knowledge, I chose the following approach: 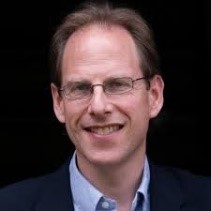 Background: Professor of Psychology and Psychiatry at the University of Cambridge, and Fellow at Trinity College, Cambridge. Director of the Autism Research Centre in Cambridge. Cousin to actor-comedian, Sacha Baron-Cohen.

Simon Theorizes a Link Between Autism and Human Invention

70,000 years ago human brains changed. Tools and weapons changed from simple to complex. There are bows and arrows, personal adornments like jewelry, musical instruments like a flute made from bone. Sculptures, cave paintings, and the list goes on. Simon postulates two types of brain changes.

One brain change Simon calls Systemizing Mechanism, using “if and then” patterns. It allowed us to see patterns or systems out in the world. For example – the flute. Blow down the hollow bone, and cover one hole, producing a particular note. Now blow down the hollow bone and uncover the hole, producing a different note. Consequently, 40,000 years ago a musical instrument was invented which could produce a whole new system of notes. This is the basis of music, which we still enjoy today. That ability to see these special new patterns, “if and then,” is one of the big changes in the human brain.

The other brain change Simon calls an Empathy Circuit, our ability to imagine what someone else is thinking. Human communication can succeed because we try to keep track of what each other is thinking, might want to say, might be interested in. The maker of the flute was probably thinking about the audience that was hearing him play. Will they enjoy listening to my performance, to my art? What do they think I am communicating?

Empathy allows for potentially successful interpersonal communications. We can sort of keep track of what somebody else knows or does not know. We can discuss our thoughts and ideas with others. We can teach if we think someone lacks relevant information. We can also deceive. Thus, empathy created a new level of social behavior. 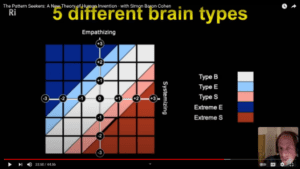 The Extreme Type S are people who Systemize nonstop. They see patterns everywhere, but they may find empathy quite challenging. The mirror image of that is the Extreme Type E, people who empathize nonstop. They always worry about what other people are thinking and feeling. They may not be looking for patterns particularly. They are not very interested in gadgets and how things work.

From research encompassing over half a million people, Simon concludes:

Professor Francesca Happé, in the next blog post, expresses a contrary perspective regarding sex and gender differences from the same data set.

There is ample evidence that there is a difference in the five brain types. Extreme S individuals are fascinated by patterns to a much higher degree, and they have excellent attention to detail. Sometimes they have a phenomenal memory. These are just differences. They certainly are not disabilities.

Sometimes there is evidence of disability. For example, some autistic children develop social skills more slowly or have delayed language development or other so-called learning disabilities. These can cause difficulties. If a student is struggling, then they need a medical diagnosis in order to get support services.

Disorder means the person is suffering, but we do not know the cause. They also require a medical diagnosis so they can get support services.

Disease is when we know the cause, usually having a specific name. Epilepsy is an example of a brain disease. We may know the location in the brain, e.g., temporal lobe epilepsy. Autistic people with epilepsy can obtain treatment for this disease.

Simon advocates for Acceptance – Respect – Dignity for all people with Autism

Students with Autism may drop out of high school. Even those who graduate or go on to college are often unsuccessful in obtaining employment. It is a human tragedy that the majority of autistic adults, despite having good intelligence are wasting away, not doing anything meaningful or purposeful, and feeling excluded by society. Most of us feel we belong in society because we work. Without work, many people with autism experience depression and anxiety, leading to unacceptably high levels of suicide.

Usually, employers only need to make modest accommodations for an autistic employee. In return, autistic employees can come up with new solutions for old problems, add innovation and even invention. They can be game-changers for their company!

Next Blog Post: The Mind Diversity of Autism, Part 2 – Francesca j, including autism in women, people with mental health disorders, and the elderly.