Suicide is the Second Leading Cause of Death From Ages 10 to 24 Years.

Students with suicidal thoughts need people whom they can trust to talk to about their feelings and fears. These students should not be made to feel guilty nor weak nor self-blaming. They need a listener with empathy, who can give them understanding, support, and guidance. A person who can get them to timely resources to save their lives.

We will save lives if we talk about suicide openly. You will hear personal stories of two people who were on the razor’s edge of death by suicide. They want others to learn from their experience, to save lives, to avoid family grief. Saving lives is a societal benefit!

There are many causes for suicide, often a combination of genetic and environmental factors. The stories in this two-part series are from people with Bipolar II, which is an example of these combined factors. Bipolar II leans heavily toward depression when it is most dangerous.

Diagnosis of Children and Teenagers:

1. Symptoms often have different patterns, may not neatly fit into the diagnostic categories.
2. May be diagnosed with other mental health conditions, making diagnosis more complicated.
3. Referral recommendation: Child Psychiatrist with experience in Bipolar Disorder.

Today’s story is by Justin Bullock (edited for length).

Justin’s Background: He is from Detroit, Michigan. Justin completed his undergraduate studies in Chemical-Biological Engineering at the Massachusetts Institute of Technology. Justin completed Medical School at the University of California, San Francisco where he was a member of the Program in Medical Education for the Urban Underserved.

In Justin’s words: Both internship year and running marathons have a way of revealing vulnerabilities and breaking even the strongest among us. As an intern with a mental illness, I approached the starting line knowing that at some point my vulnerabilities would be exposed and that hitting the wall was inevitable. I didn’t know when, but if my history of mental illness was any indicator, my crash would be bad.

My year started off perfectly! Yet the bipolar mind is fickle, and happiness and accomplishment can quickly fade into pain and suffering. For me, it was the night shifts. Rather than making me tired, nights activated me; instead of sleeping during the day, I worked. As I worked harder, a fire set my mind ablaze.

Another resident whom I’d fallen for would soon move across the country. I told myself, I’m just sad about this relationship ending, I’m not depressed. I didn’t notice depression surreptitiously assaulting my mind until it was too late.

The elements of SIGECAPS, a mnemonic for the diagnostic criteria for depression — loss of Sleep, loss of Interest, Guilt, loss of Energy, loss of Concentration, loss of Appetite, Psychomotor retardation, and Suicidality — feel miserable at best and may be lethal at worst. It’s the second “S” that gets me. “Jump.” I knew the first time it drifted through my mind that my suicide would be by jumping.

“I’m starting to get depressed,” I told my sister emotionlessly. She began to cry, probably flashing back to the last time I was severely depressed, attempted suicide, and ended up in the ICU. She knows my depressions well.

As I get sicker, depression’s seductive voice begins to sound rational. “Justin, you aren’t strong enough to take another depression, just kill yourself now before it gets worse.”

I told a senior resident that I was struggling. He asked if I thought about hurting myself. “I don’t have a plan,” I lied. Looking at me with suspicious eyes, he contemplated placing me on a psychiatric hold for presenting a danger to myself. I told him, “I saw my therapist today.” The resident seemed appeased by that information. He didn’t hospitalize me. He asked, “Would you call someone if you had an emergency?” I told him I would call my therapist. I didn’t want my friends to have the burden of my life. It wouldn’t be fair to them.

I made the decision to schedule an emergency appointment with my therapist. He, my psychiatrist, and I decided that I needed to be admitted to a psychiatric hospital to quickly adjust my medications and to keep me safe. So I went to the hospital.

This was the first time in my many depressions that I have been successful in not hurting myself. I take pride in my admission to the psychiatric hospital. I have a disease that, unsurprisingly, flared during my intern year.

Thanks to long-term therapy, I have developed many coping skills and, in some ways, have an advanced ability to navigate my disease. I continued weekly therapy during my internship, and it was the reason I went into the hospital. I have friends at other programs for whom going to therapy has been challenging or even frowned upon. Our lives are worth more than the 2 hours we are gone each week.

Soon after I left the hospital, depression took the life of one of my friends who was also in medical training. As I confront the shock, the pain, the guilt, and the revival of my own demons, I am determined to continue to fight for all the remarkable, kind people whose voices were silenced too soon by mental illness — and for those who suffer in silence.

My family and program director recently told me how proud they were of me for going into the hospital. I think that is pretty freaking cool.

Next Blog Post: Suicide – How We Can Help Our Students (Part 2):
Childhood and Adulthood Living with Bipolar Disorder

Remembrance of The 27 Club:

Many outstanding photos on the Look Inside preview pages 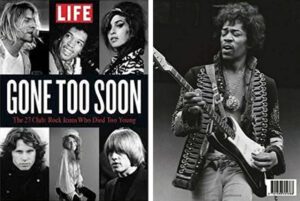 Life Magazine Special Issue, The 27 Club, musicians who died at age 27. Their deaths were often from mental illness, extremely stress-driven lives, substance abuse, and transportation accidents. During their shortened lives, these musicians transform our modern music and pop culture.

Resource for Musicians of All Ages Needing Mental Health Support:
Overthebridge.org provides a safe haven, peer support, and other resources for musicians with these life challenges. People in the music field die from suicide at 2 times the rate of the general public.