Celebrating Neurodiversity and Fighting for Educational Equality in 2021 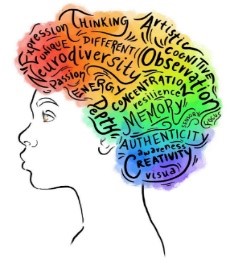 This graphic design, Neurodiversity Awareness, will represent the theme of Neurodiversity for this blog during 2021. The artist is Tara Vasanth, a student at The College William and Mary. View more of Tara’s artwork at Taravasanth.com and her gallery page.

Tara writes: “It was a pleasure to illustrate an image depicting the vividity and vibrancy of neurodiversity. Neurodiversity is the viewpoint that brain differences are normal, and strives to reduce the stigma around learning and thinking differences. To try and artistically render this concept, I thought it would be a good idea to capture the originality of individual thinking by using a rainbow palette and filling a colorful cloud of thoughts with empowering words associated with neurodiversity.” – April 7, 2020

ACEs Connection’s 3 Realms of ACEs illustrates the factors that cause adverse childhood experiences (ACEs) within households, from communities both current and historic, and from environmental factors. ACEs Connection expresses the detrimental consequences on children unless these issues are addressed in positive and supportive manners. 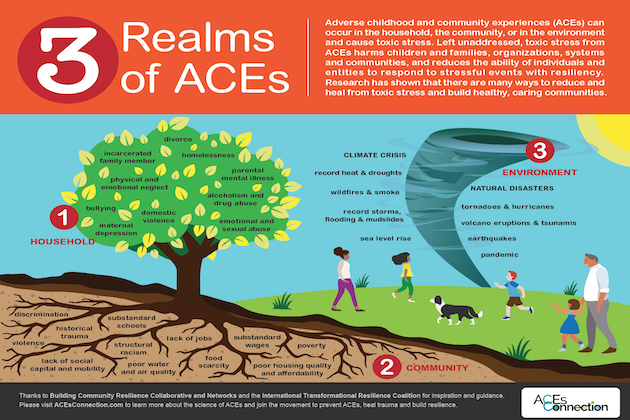 This year I will write about the brilliance of the many forms of diversity as well as the fight needed to eliminate the roadblocks for those excluded and stigmatized for not fitting into the education system’s expectations of so-called “normal.”

Today I am highlighting Judy Singer, Australian sociologist and a pioneer in the field of neurodiversity. She tells us why she coined the term “Neurodiversity” in 1998.

Judy Singer was recently interviewed at Spectrum Suite: Celebrating Neurodiversity Through Education. Singer’s work on autism and neurodiversity is widely known from her writing “Why Can’t You be Normal for Once in Your Life?” The title came from Singer’s father’s daily statement of exasperation, in denial of what his daughter kept explaining to him.

Singer said neurodiversity should be recognized and respected as a social category, like ethnicity, socioeconomic class, sexual orientation, gender, or disability.

Singer said, “When I grew up, we thought children were born blank slates that parents could write on. When my daughter was born, I had to revise my thinking.” Singer knew early on that “Asperger’s was going to be huge” and recognized there would be a “feeding frenzy by the medical and helping professions who, apart from a few pioneers at that time, thought that any layperson who mentioned a disability those professionals had never heard of was being neurotic.”

When speaking about herself and how she fits into the neurodiverse tapestry, Singer stated, “I’m not quite disabled and I am not quite mainstream.” Singer clearly recognizes firsthand the daily struggles of the neurodivergent individual, saying that in her youth that she suffered from bullying and feelings of exclusion. She had difficulty making eye contact and small talk. She had trouble finding the ability to stand her ground with peers. Other difficulties Singer faced in growing up including battles with obsessive behaviors and extreme emotional attachments.

Like many who are part of the neurodiverse population, Singer struggled with building a career. When faced with challenges, she tended to give up on things. Singer believes she is highly intuitive, taking in everything when in a large group. She finds it hard to converse in group settings. These factors stymied her career progress.

In the 1990s, Singer recognized that people with different kinds of minds were oppressed in the same way as women and the LGBTQ+ community before they had their own movements. She decided neurologically diverse people needed a movement of their own. They just needed a catchy name for it. “But ‘neurological diversity’ was too much of a mouthful to be catchy. That’s when the word Neurodiversity came to me,” Singer explained.

Singer gave up on any academic ambitions. “In the end, it all got too hard. I was a sole parent with no family other than an Asperger’s mother and daughter, and I was struggling to keep our heads above the poverty line. I gave up on the painful uphill struggle for recognition of my work and instead focused on practical local initiatives, like setting up a social club for Sydney’s Asperger’s teens.”

Singer shared her daughter’s absence of social masks and “incredibly, lovely, grateful” presence, and her passion for performing in musical theater. Even though Singer’s daughter is in her early 30s, like many autistic adults, she looks young for her age and is often asked what high school she attends.

Singer tells us about her daughter. She loves fan fiction, including Harry Potter books and The Hunger Games series. She has a “fantastic memory” and is adept at computers. Still, Singer sees her grown daughter having challenges with speedy cognitive processing, multi-tasking, and social self-promotional skills required to find gainful employment. Despite learning difficulties, Singer explains that her daughter has her own holistic, rather than linear, way of acquiring knowledge. However, despite having an outstanding Librarianship diploma, her daughter could only find volunteer library work and now works part-time doing data entry.

Singer explains that business is built around speed and competition and that makes it extremely hard for those on the autism spectrum to get jobs. Singer sees that too often people with autism spend their lives taking more and more courses, which does not lead anywhere beyond more volunteering or, at best, low-paid menial tasks that do not fit their abilities. Disabled people are still ripe for exploitation, doing work they have every right to be paid for.

That is starting to change now and may change more in the future. Even in 1998, U.S. writer Harvey Blume in The Atlantic stated, “Neurodiversity may be every bit as crucial for the human race as biodiversity is for life in general. Who can say what form of wiring will prove best at any given moment? Cybernetics and computer culture, for example, may favor a somewhat autistic cast of mind.”