Voices of the Jewish People Living in the Warsaw (Poland) Ghetto 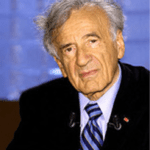 “I swore never to be silent whenever human beings endure suffering and humiliation. We must take sides. Neutrality helps the oppressor, never the victim. Silence encourages the tormentor, never the tormented. Sometimes we must interfere.”

People Shunned the Truth While 500,000 Men, Women, and Children Died

Nazi Germany was overrunning Poland, their first country of conquest. Warsaw’s Jewish families composed one-third of Warsaw’s population, many of whom were wealthy and renowned. The small towns and countryside had substantial Jewish populations as well. Once the war broke out, these rural Jewish people swarmed to Warsaw, believing they would be safe in their country’s capital, where so many Jewish families prospered.

None of these Jewish people, whether already living in Warsaw or fleeing there, knew that they were going into heavily overcrowded closed ghettos. They were all imprisoned in these neighborhoods by brick and barbed wire.

The Oneg Shabbat (Joy of the Sabbath), a small group of Jewish people in the Warsaw Ghetto, worked incredibly hard to document what was happening to them. They encouraged people throughout the Ghetto to provide documentation in many forms. Some pieces were written in the form of journals, diaries, essays, commissioned surveys, poetry, leaflets, and precise reportage in Yiddish, Polish, and other European languages. Hundreds of paintings, sketches, maps, tram tickets, memorabilia, newspapers small pieces like sweets wrappers, recipes, and even photographs secretly developed in the ghetto were carefully wrapped in paper and stored. Even young children contributed to this project.

This massive collection of 35,000 documents shows us the optimistic thoughts of Warsaw Ghetto inhabitants versus the actuality of their existence in the Warsaw Ghetto from 1940 through the spring of 1943.

In 1940 – 1941 most of the Jewish people thought that they would come out of the Warsaw Ghetto alive. As soon as the war would be over, everything would be fine. Everything would snap back to what it was before the war, “as if by magic.”

In everyday actions, however, everyone was very careful. Before leaving home, a person would ask, “How are things out there today?” People would try to keep an eye out for danger on a crowded street. People walking around could exchange words of warning, and that could change the whole movement of the street. A word of danger could move 1,000 people inside of crowded gateways, leaving the street empty.

There was very little food available. Rations were not adequate to keep people alive. So, people survived by smuggling in food from outside the Ghetto. Many of these smugglers were children, as their size allowed them to sneak through small openings. Despite the food smuggling, people still died of starvation.

People in the Warsaw Ghetto heard about the loss of Jewish lives in the Polish countryside. These people often lived in small communities, shtetls. It was easy to round them up and kill them. In the Warsaw Ghetto, people thought they were safe from death. How could 500,000 Jewish people be destroyed?

One goal of the Oneg Shabbat was getting information out to the world about the conditions in the Warsaw Ghetto. On June 16, 1942, the English had a broadcast about the horrific fate of Polish Jews. Those living in the Ghetto celebrated, hoping to be rescued now that the world had heard about their extremely adverse conditions. But that rescue was never realized.

In July 1942, Nazi trains began taking several thousand people away every day. People were hopeful that the trains would take them to the “East” to work camps, where life must be better. Failure to report to the trains was punishable by death. Hopeful, people took their most meaningful possessions with them, only to find themselves crowded into cattle cars.

In August 1942, at the height of the deportations, the Oneg Shabbat collaborators packed several thousand documents into ten tin boxes, bound them with cord, and buried them. These men put in their last notes before burying the boxes, so we know who they were.

In September 1942 a man escaped from Treblinka, returning to Warsaw to tell people the horrendous truth of the death camps. He went from house to house, gathering people around and telling them about the gas chambers. However, people did not believe him. Perhaps this degree of evil was beyond comprehension even for people suffering so severely.

In December 1942 it was clear that life was short for the remaining Jews in the Warsaw Ghetto. They smuggled in firearms and created many types of simple weapons. When the Nazis came for them, “they fought the battle of their lives.” Although they lost in the end, they killed Nazi soldiers before their own deaths. They fought for months in the spring of 1943. The Warsaw Ghetto Uprising showed that Jews could fight with weapons and die with honor. No more Jewish People remained in the Warsaw Ghetto. Of the 500,000 Jewish inhabitants, there were only a handful of survivors.

Postscript: Three members of the Oneg Shabbat inner circle did survive. In September 1946, they determined where the 10 boxes were located. Then in 1950, laborers at a post-war housing development stumbled upon two metal milk churns filled with documents. Around 35,000 documents were recovered in total. All efforts to find the last cache – the biggest – have failed. The rest of the archive may still be under Warsaw. 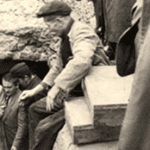 This BBC Documentary Podcast tells how people lived in a catastrophic time. People were suffering torture, degradation, famine, death. It also shows the positive spirit, the will to create musical productions, to save orphans, to covertly educate the children, which was forbidden. For their incredible individual stories, listen to the BBC podcast. 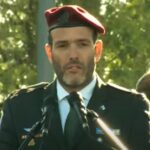 Here is it recited on May 1, 2017 at the International March of the Living Ceremony, with Holocaust survivors present.

Why Telling Stories of the Past is Necessary and Meaningful Today

There are those who do not want the dark side of our nature taught in schools. But how do we raise wiser students if schools are silent on the evil that humans can act upon one another? The New York Times “1619” series of six podcasts magnificently tells the African American experience in the United States.

Why should we keep alive the stories of the Holocaust? As a Jewish woman, I find the loss of six million Jewish men, women, and children abhorrent, reason enough to keep knowledge of the Holocaust present in our minds and teaching.

But Hitler went far beyond anti-Semitism. Other groups were considered “inferior”: Roma (Gypsies), Germans with disabilities, various Slavic peoples (especially Poles and Russians). Others were persecuted on political, ideological, and behavioral grounds, including Communists, Socialists, Jehovah’s Witnesses, and “homosexuals.” 75 million people died in World War II, including military personnel and civilians. Hate and killing do not stay contained! 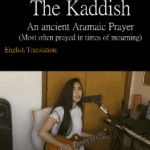 I welcome you to listen to this graceful and soothing rendition of the Mourners Kaddish. Although originating two thousand years ago, its words are as meaningful today.

During the 13th century, when the Crusades threatened the Jewish communities of Europe, the Kaddish became inextricably linked to loss and mourning.

You can see the English translation on the video as it plays. A similar translation is found at the bottom of this post.

Next Blog Post: How King County is Working to End Youth Incarceration by 2025!
This is a positive and optimistic project with strong community support. It will improve the lives of our youth, especially BIPOC youth who are 80% of those incarcerated in King County Juvenile Detention.

English Translation for the Mourners Kaddish

May the great Name of God be exalted and sanctified, throughout the world, which he has created according to his will.
May his Kingship be established in your lifetime and in your days, and in the lifetime of the entire household of Israel, swiftly and in the near future;
and say, Amen.
May his great name be blessed, forever and ever. Blessed, praised, glorified, exalted, extolled, honored, elevated, and lauded be the Name of the Holy One, blessed is he – above and beyond any blessings and hymns, praises and consolations which are uttered in the world;
and say Amen.
May there be abundant peace from Heaven, and life, upon us and upon all Israel;
and say, Amen.

He who makes peace in his high holy places, may he bring peace upon us, and upon all Israel;
and say Amen.